We often hear that lower lag, latency or ping is good for gaming – which it is – but let’s put some specific values on it. What is a good ping time when measured through tools to make sure we don’t lag when playing games online?

Latency or ping is most often measured as a Round-Time-Trip (RTT) metric, measuring the time it takes for a packet of data to be sent to another server or device and come back again. Here are some bottom line figures on what’s good and bad latency for gaming:

Let’s break down this in a little more detail, with what you can expect at different ping levels

Under 20 milliseconds – Superb ping value. You’ll have no problems with lag at all with a ping this low.

20-50 milliseconds – Still very good. Will almost certainly have no issues with lag even at these levels.

50-100 milliseconds – Will still be OK for most games. Will probably not notice any visible lag on screen, but still may be at a disadvantage playing certain faster paced games (eg. FPS) against players with a better connection and lower ping.

100-150 milliseconds – Will start to have problems with some games at this level of ping, some noticeable lag on screen and may find yourself getting killed a lot on First Person Shooters.

150 milliseconds+ – Will be very hard to properly game online smoothly for anything but very slow turn based games. Noticeable and regular lag and jumping about on screen. Will also be very annoying for other players playing against you online on faster paced games with this level of latency.

Some Games Are More Sensitive to Ping Than Others

Having said all this, it is true that ping matters more for some online multiplayer games than others. In general it all depends on how fast the game moves as to how important your ping value is.

For example, any very fast paced multiplayer game where the relative position of players is important (eg. FPS games like Call of Duty, Battlefield, racing games, football, tennis, fast paced sports) then having a low ping is very important to have a good experience playing against others online. GTA also counts among this realistically because it can also move at a fast pace on online missions and when driving vehicles.

You can’t really play these games properly without having a low ping, because the experience will be so jumpy and jittery that it simply isn’t worth it. You’ll start to really annoy the people you’re playing with if your connection is too unstable.

So having some ping isn’t always a deal breaker, depending on what you play. However, most of us gamers play at least some games that move quickly enough that we need a low ping.

Let’s look at some different ways to test our ping, and then ways to reduce it.

First of all, you can test the download and upload speeds on your PS4 by going to Settings….Network…..Internet Connection.

Your PS4 will run it’s own test on the speeds it can get with the current connection, displaying a results screen something like this: 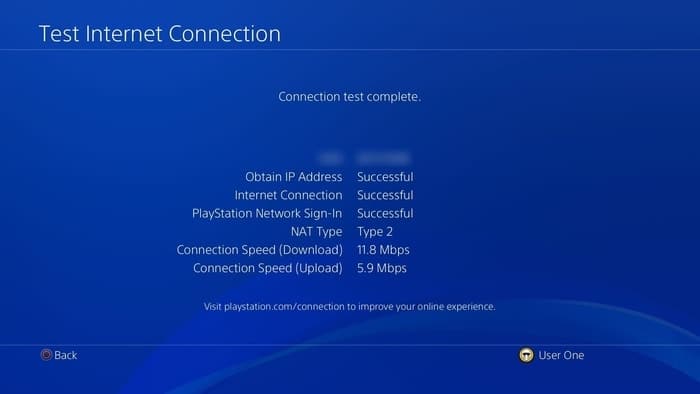 But this in built console tool is only testing bandwidth – download and upload speeds – and not latency, which is a separate measurement.

Bandwidth measures how much data can be sent over a connection; latency measures how fast data can be sent over a connection. Beyond a bare minimum of 2-3 Mbps download and  around 1Mbps upload speed, bandwidth is actually not that important for gaming; it is the latency or ping that is most important as this determines how fast consoles can send packets of data between each other or centralized game servers.

See our article where we cover this issue of latency vs bandwidth for gaming in more detail.

Therefore we need some additional tools to test the ping value on our PS4 or other console.

Here are some resources to actually test ping on your PS4 or other games device. Both these resources work on the console browsers.

You can use these, or any other free online ping test tool to see what sort of latency your console is getting on it’s current connection.

It is also a good idea to run several tests and try different tools, since wireless connections especially can be very inconsistent and give different values literally from one minute to the next.

However, once you start getting some kind of ballmark ping value, you can decide whether you need to do anything to improve your connection. Anything below 50 ms and you haven’t got a problem; anything between 50 and 100 ms you still should be OK; anything over 100 ms then it’s a good idea to do something about it.

Let’s look at some ways to do this below.

1. Use Wired Connections Whenever Possible – This is the number one factor that will reduce ping on any network – if you are on wireless, get onto a wired connection instead. Wired LAN connections are always better and more stable than Wi-Fi delivering lower ping and better speeds in almost all cases.

Wireless connections by contrast are always prone to dropping out, especially the further you are from the router, with more walls and other obstacles in the way. This will almost certainly cause you to lag on faster paced games, unless you are very close to the router.

Long ethernet cables are readily available from Amazon or your local store. If you don’t want to be running long cables through the house then a Powerline Adapter is an excellent home networking solution that allows you to bypass Wi-Fi and get on a wired connection using the existing house electrical wiring, with no long cables needed.

They can be a great way to get ping down if you are struggling on Wi-Fi. See the video below for a quick demo on how powerline adapters work.

Click here to view the TP Link Nano Powerline on Amazon. See our page on powerline adapters for a breakdown of more models.

2. Only Play Against Players Close to You Geographically – Self explanatory – you have more chance of lagging playing against someone several continents away than someone in the same country or state.

Many games have auto-matchmaking features that automatically filter the most suitable players for you based on location, but not all games do this. Try to play against players in the same country at least (sometimes the same continent also works), depending on how latency critical your game is.

3. Use Quality of Service (QoS) Settings on Busy Home Networks – This is another underused feature that is available on some (not all) routers. Using QoS settings tells your router to process traffic in a certain order so that your PS4 or other games console is prioritized, hopefully reducing lag at peak times when other people are also using the internet on the same network.

This can be a big one when you have someone else also trying to stream YouTube or Netflix at the same time you are gaming online. Routers can get overloaded with all these demands at once and using QoS can tell it to process traffic in a certain order to keep everyone happy.

Here are the quick steps for setting QoS:

4. Use DMZ Settings – This is another router settings trick which is really easy and can help with lag and connection issues in general. Some networks and routers can make it hard for games consoles to connect properly with game servers and other gamers, leading to “red connection bars” in lobbies, party chat issues and lag when playing games.

Placing your games console into the DMZ section of your router fully opens it up to the internet for the best possible connection to other gamers online. It is a shortcut way of implementing port forwarding (there are lots of ways of doing it but DMZ is the easiest) and getting you on Open NAT Type, all of which means you basically have a better connection to other gamers and are less likely to have lag and connection issues.

Here are the quick steps to configure DMZ:

5. DNS Settings – A tricky one. Changing DNS settings can sometimes improve download and upload speeds if you are getting bad speeds at the moment, but there is no real evidence that it reduces ping or latency when it has been thoroughly tested.

The only case in which you may get better ping by changing your DNS servers is if you currently have very low download and upload speeds (not enough to even game on), and changing your DNS settings helps to improve them to the point where you can play online without lag.

In most cases, changing DNS settings won’t make a difference. See our article on DNS Settings and Latency for more on this.